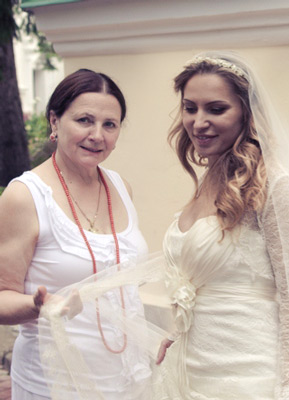 Slim and delicate girl, Yuliana Prado at such early age keeps firmly the ground and knows what she wants to get from life. It happened so that nothing easy was on her way, and she should make efforts to achieve something.

Yuliana got married and is living in Austria now. But the singer does not leave the stage, but, on the contrary, is moving forward and reaching a new level. In close cooperation with European orchestras she is recording new songs.

The most important is that this year Yuliana will become the Candidate of Culture Sciences. The Approval from the Highest Jury has been received, and now it is only a question of red tape. There is no point in pretending otherwise, it is rather pleasant, isn’t it?!

Her diploma project was dedicated to the creative work of the Great Ukrainian and Artist - Nina Matvienko. To write this project was not easy as Yuliana touched in her work not only artist’s creative work, but her inside world as well. It was a world of woman’s fighting for her right to be socially equal and fulfilled in a society. The girl is acquainted with the traditions of Polessia, that’s why her work was quite sincere.

“There are four mythological and great images of woman in Ukraine, namely, Lesia Ukrainka, Iekaterina Bilokur, Lina Kostenko and Nina Matvienko. These are the women who left a big track in the history of mankind…” - thinks Yuliana Prado.

The project consists of a great number of interview and live communication. “As far as me concerned, Nina Matvienko is a real Woman and I want to be like her!” – says Yuliana.